Pregnancy is a wonderful time for many women, but most of us would agree the side effects can be exhausting. For some unlucky women, this includes tinnitus and more rarely, hearing loss.

Tinnitus, which is a fancy way of saying ringing in the ears, affects roughly 1 in 3 women during pregnancy. It affects approximately 1 in 10 women who aren’t pregnant.

Causes of tinnitus and hearing loss during pregnancy

Why are these changes in hearing so common? Normal hormonal and circulatory changes during pregnancy are largely to blame. Less commonly, tinnitus and hearing impairments during pregnancy may be due to several medical causes, including high blood pressure, migraines/headaches, anemia, ear and sinus infections, stress and poor sleep, and earwax blockage. Below, we discuss these causes in more detail.

Note: If you’re pregnant and experiencing tinnitus or other hearing problems, talk to your medical provider as some causes require prompt medical care. 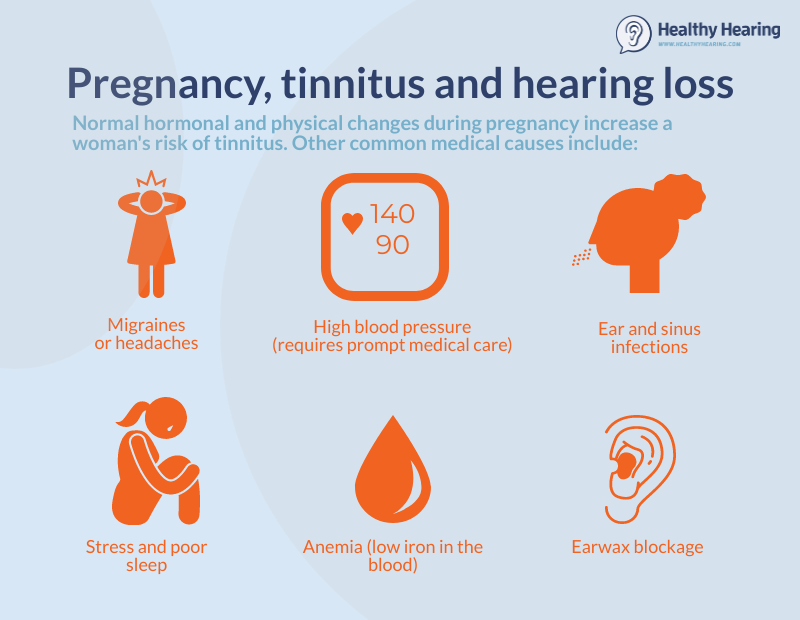 High blood pressure can lead to hearing loss and tinnitus because our delicate inner ears are highly sensitive to any changes in blood flow. High blood pressure is an especially dangerous condition during pregnancy, so it’s something you should take seriously and monitor.

In pregnant women, high blood pressure can indicate preeclampsia or the more rare HELLP syndrome, both of which can escalate into medical emergencies for both mom and baby. Preeclampsia and related conditions affect between 3 and 10% of pregnancies. While tinnitus and muffled hearing doesn’t affect all pregnant women with high blood pressure, it’s still considered a red flag.

For some pregnant women, the tinnitus may match the rhythm of their pulse or heartbeat, known as pulsatile tinnitus. Some women report that their hearing feels muffled and they hear a loud whooshing sound.

With so many blood vessels near the ears, it’s no wonder tinnitus is a sign of elevated blood pressure. Even if you don’t have a history of high blood pressure, pregnancy can trigger it in healthy women. It’s vital to have it monitored and treated properly by a knowledgeable pregnancy care provider.

Pregnant women are at elevated risk of developing iron-deficiency anemia. (Iron helps red blood cells carry oxygen to the body, including the auditory system.) If you don’t get enough iron in your diet while pregnant, you may experience a range of symptoms, including hearing problems. Studies show that anemia and hearing impairment, including tinnitus, are linked—though the relationship isn’t well understood and the research was conducted on older adults.

If your pregnant, make sure your prenatal vitamin has sufficient iron because your body will need approximately twice as much iron as it did in your pre-pregnancy days. Try focusing on eating iron-rich foods as well to see if that helps decrease the ringing you’re hearing. Some great foods to include are spinach, legumes, turkey, red meat, broccoli and the occasional treat of dark chocolate.

If you’re prone to getting headaches, you could be at increased risk for developing tinnitus or hearing problems (including sound sensitivity, known as hyperacusis) when you’re pregnant. It doesn’t help that pregnancy can trigger more frequent headaches. If you suffer from migraines, and pregnancy is making that condition worse, you may find that you have hearing loss, tinnitus or muffled hearing that comes on or gets worse during your migraines.

If you frequently get headaches or migraines during pregnancy, you should mention it to your doctor. They can go over your treatment options with you, while carefully weighing the risk to your unborn baby.

Colds that lead to sinus or ear infections

Pregnancy isn’t just hard on you, it’s also tough on your immune system. Your immune system is temporarily suppressed while you’re pregnant. That can mean more colds and viruses for you. It also might mean more allergy symptoms.

The risk of getting colds is that they can cause sinus or middle ear infections. Those infections can cause temporary hearing issues and may require treatment.

To avoid catching colds and other viruses while pregnant, you should focus on making healthy food choices, taking your prenatal vitamin every day, getting enough sleep, and staying away from people who are obviously sick. It’s always better to prevent something than it is to try to treat it.

Even if we think of it as gross, earwax can keep your ears safe from things like microorganisms and dust. But it can also backfire on you. Too much earwax can lead to hearing loss and tinnitus.

If an earwax blockage happens, you might notice hearing loss that won’t improve until the excess wax is removed. You can try using earwax removal drops at home, or you can let your doctor remove the excess by using a little instrument called a curette. Fortunately, this is usually a simple problem to fix.

Pregnancy can be extremely stressful, especially when you throw the anxiety over a worldwide pandemic into the mix. Hearing loss and chronic stress are linked, especially when stress is causing physical problems like high blood pressure. If you have a history of tinnitus, it also may be aggravated because you feel stressed all the time and aren’t getting enough sleep.

It can be difficult to relax when you’re planning for a baby, but you may benefit from going for a walk outside, doing some meditation exercises, practicing deep breathing or getting a massage.

Issues with your bite

TMJ disorder (jaw clicking and pain) is more common among pregnant women, due to hormonal changes, swelling, stress and other factors. It’s hard to believe that tinnitus can be caused by dental issues, but it’s true. Problems relating to the jaw joint can cause tinnitus or a feeling of clogged ears because an imbalance in the joint results in pressure in the ear.

If you suspect this may be an issue for you, it might be a good idea to see a dentist if all other medical reasons have been ruled out. A simple oral device can lead to better alignment, which may improve your tinnitus and potentially improve the feeling of clogged ears.

Discuss your symptoms with your provider

Temporary hearing loss and tinnitus can be a big challenge when you’re pregnant. You worry that something is going horribly wrong and wonder how you’re going to function when you’re not hearing your best. It’s vital that you receive regular prenatal care and discuss your symptoms with your healthcare provider. Any sudden hearing loss or pulsing tinnitus should be treated promptly.