In order to stay balanced and hear properly, we have two ears that help us hear difficult sounds and accurately understand depth perception. If you’ve ever taken a hearing test, you may know that each ear is examined separately because this gives a hearing healthcare practitioner a better understanding of how sound is perceived in the brain. 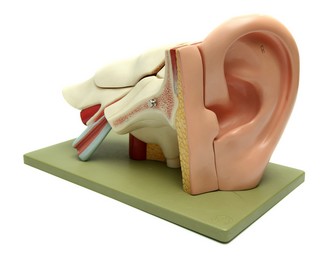 Single-sided deafness is very profound for sufferers because it makes understanding depth and direction of sound challenging. One ear has to work much harder to comprehend speech and noise. Try it out by plugging one ear and listening to music or going about your daily routine.

When you see a concert, the auditorium or hall is specifically designed to amplify and transmit sounds so that you, the viewer, hear the best quality music. The ears work in a similar fashion. Pressure waves and vibrations that move through the air, such as the strum of a guitar string, are picked up by the ear and transmitted through the brain. The ear can separate up to a hundred sound frequencies, which is what makes it possible for us to decipher the difference between instruments being played.

Just as the eyes work to perceive how far away things are, the ears are another tool we have to understand depth of sound. Our two ears detect sound waves by loudness, pitch and timbre, which allow us to locate noise. For example, if a sound is coming from the left, that ear is going to hear the noise slightly faster than the right ear. However, if there is sound directly in front, behind or up above your head, it might take you a minute to comprehend the exact location of the noise.

Our ears can pick up an array of frequencies and pitches, but some of those noises are more challenging for the ear to decipher than others. Because of this, people with hearing loss in one ear can have a lot of trouble with some sounds.

Hearing in noisy situations makes it harder for the ears to pick up exact sounds, and only having one ear to do the work can result in straining of the ear. Two ears increase the accuracy of picking up difficult sounds because they can piece together the sounds.