Have you ever left a movie theater with a fuzzy feeling in your ears? Or complained to a friend because the previews were too loud? If so, you might find some relief in a recently introduced Connecticut bill.

The General Assembly’s Public Safety and Security Committee heard a proposal from Connecticut lawmakers which would require movie theaters to regulate noise. The bill would establish a maximum decibel level at cinemas across the state.

A decibel is the unit used to measure sound. If passed, this legislation would require movie theaters to keep the maximum volume of films and previews at 85 decibels.

So what’s in a decibel anyway? 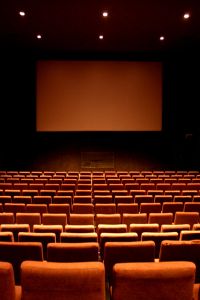 According to the Centers for Disease Control and Prevention, noise exceeding 90 decibels will feel loud to the ears. If movie theaters keep the volume at the proposed level, the amount of sound would be similar to the noise produced by heavy city traffic.

In comparison, rock concerts today can peak at volumes of 110 decibels and greater.

The National Institute on Deafness and Other Communication Disorders reports that prolonged or repeated exposure to sounds 85 decibels and higher can cause hearing loss. And the louder the sound, the less time it takes for damage to occur.

Many individuals don’t realize how loud sounds really are. The hum of a refrigerator slides in at 45 decibels, while a motorcycle circles around 95 and the sirens on emergency vehicles top out at 120. Because of these loud everyday sounds, an estimated 15% of Americans suffer from noise-induced hearing loss.

The lawmakers of Connecticut are hoping the proposal limiting high volumes will help curb some of these numbers.

What makes this legislation necessary

Hearing loss is a serious issue in today’s society. From exposure through work, recreation and household chores, we’ve got dangerous noises all around us. NIHL is an easy thing to prevent. Between limiting exposure to loud noises and wearing the proper protection when you can’t, chances of suffering from NIHL are greatly reduced.

NIHL is usually a temporary condition, but can become a permanent issue if subjected to abnormally loud sounds or constant exposure.

In Hartford, some movie goers have measured sounds during films at volumes reaching 98 decibels. To put that in perspective, that’s almost as loud as a train passing or an airplane taking off.

According to a cinema owner, the proposed level of 85 decibels hovers around the average volume of dialog in movies.

Many individuals support this bill, in favor partly because they’ve noticed their ears hurting or vibrating during previews and other action-packed sequences. Additionally, this proposal is receiving support from state representatives and legislators, such as Tony Hwang, who agrees volumes are “exceedingly loud depending on where the individual is sitting.”

What makes this proposal unnecessary

There are numerous reasons people across the United States are sounding off against sound limits in movie theaters.

From worries of too much government involvement to the varying sound levels from one theater to another, some people have concerns about this proposed bill.

According to one theater system sound expert out of Massachusetts, creating a maximum noise level for films won’t quite solve the problem. Most theaters have sound systems in place for previews and movies, so by limiting the noise level it could make it difficult to calibrate motion pictures for easy listening when it comes to dialog and other low-volume scenes.

And because theaters use different sound systems, it’s also possible that a movie reaching only 85 decibels on a lower-quality system would produce nearly-as-loud effects as a theater using a higher-scale, digital system.

Naturally, many cinema owners and executives don’t see the need for a volume limit. In fact, some are worried they’ll receive a negative response on how difficult this will make movies for some individuals to hear.

Some experts agree with executives’ worries, citing that most complaints received by consumers aren’t due to volumes that are too high, but rather, the constant variation in sound from one scene to another.

This situation would explain why some theaters seem to cause discomfort to the ear, while others do not.

Additionally, there’s concern over how this would be enforced., what consequences would be and how this would impact the movie-goers experience. The Motion Picture Association of America opposes the bill, stating it would be in violation of the First Amendment and freedom of speech.

Where to go from here

Connecticut is the first state to pursue this type of proposal and the results could very well set the precedent across the nation.

Because the bill was just recently presented to the safety committee, legislators are still waiting for feedback before proceeding with the proposal. If passed into legislation, this law could go into effect as early as October.