There has been much recent research about how loud music can damage hearing, whether it’s from attending multiple concerts without protecting your hearing or playing music too loudly through your headphones. And rightly so, many people are concerned about the current or potential hearing loss that young people will experience from their exposure to loud music. 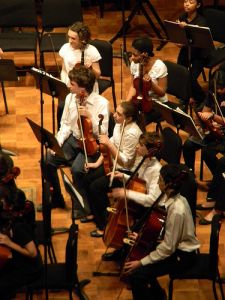 But a new study has drawn attention to the perils of playing in an orchestra. During the International Horn Society’s 2010 meeting in Brisbane, Australia, researchers from the University of Sydney and the University of Queensland found that French horn players are likely the greatest at-risk population for noise-induced hearing loss (NIHL) among professional orchestral musicians. The study, published in the Spring 2013 edition of Journal of Occupational and Environmental Hygiene, examined 143 professional French horn players and found that among those 40 or younger, there was an 18 to 33 percent chance of NIHL. The researchers were surprised to find that only 18 percent of this group wore some form of hearing protection.

“Even within that 18 percent, the use of hearing protection appears to be inadequate with 81 percent of these participants reporting their frequency of use as ‘sometimes’ and 50 percent reporting they use generic, foam or other inferior forms of protection,” said Wayne Wilson, the lead investigator and a senior lecturer of audiology at the University of Queensland.

The findings are important because they show that, even when accounting for age-related hearing loss, there is still a significant effect on hearing loss from sound exposure. The researchers indicate that more orchestra and hearing loss professionals should use the results of this study to make a change in how they address musicians at risk of hearing loss, not only because of their health but because it might also harm the profession:

“Our findings also reinforce the need to educate horn players, their mentors and audiologists about the need to protect hearing and how best to achieve this while still enabling musicians to play to the highest level,” said Ian O’Brien, a professional French horn player and doctoral student researcher at the University of Sydney.  “Even mild hearing loss can result in difficulties discriminating pitch, abnormal loudness growth and tinnitus, all of which can affect a musician’s ability to perform, subsequently jeopardizing his or her livelihood.”

But French horns aren’t the only instruments that can contribute to hearing loss and also tinnitus! Think about crashing cymbals, for instance. Piccolo and flute players are also at risk, and at their highest volume, violins – which rest on the shoulder very close to the ears – can peak at 103 decibels, which is noisier than some power tools. Here’s a list of decibels for many common instruments when played at their loudest:

Protect yourself from NIHL

Musicians depend on their hearing for performing well. Luckily, French horn players and other musicians don’t have to stop playing their beautiful music to protect against hearing loss. Here are some tips: