Much more public attention is being paid to the troubling issue of noise-induced hearing loss, which has become especially relevant with the rise of sophisticated mp3 players,  iPods and the widespread use of headphones and accessibility to loud music. Kids at younger ages are now walking around with headphones continuously in their ears and their music turned up so loud that they can’t hear their surroundings.

Parents, healthcare providers and public health groups are becoming concerned as kids and young adults are suffering from noise-induced hearing loss. In fact, according to the CDC, about 12.5 percent of children between six and 19 years of age have permanent NIHL, which is about 5.2 million kids. And about 17 percent of adults between the ages of 20 and 69, or 26 million people, have permanent damage to their hearing from excessive noise. 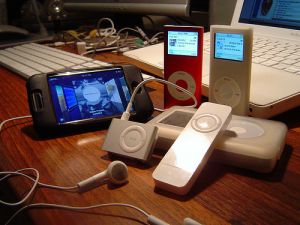 In response to this epidemic, public health groups, including the American Academy of Audiology, ASHA and the National Institute of Deafness and Other Communication Disorders (NIDCD) have public campaigns to raise awareness of NIHL – something far too many young people don’t take seriously. Here is an overview of these important campaigns:

Turn it to the Left!

From the name, one can tell that this American Academy of Audiology campaign is urging people to turn their volume down – to the left. The initiative is meant to educate the public on how high-level sound damages their ears and to raise money for further research in NIHL.

“Turn it to the Left” is a rap written by Benjamin Jackson, a classically trained musician and the son of world-renowned conductor Isaiah Jackson, as a cool way to get kids and young adults to pay attention to the harm they might be doing to their ears:

“Do your ears hurt? Do they buzz or ring? Are you turning up the volume on everything? You know 10 million people in the U.S.A. are saying yes to those questions everyday. It ain’t no fun man, it ain’t no fun, when you’re 20 years old but your ears are 81. Imagine what it’s like to be hearing this track except the words are all muffled and the beat is whack.”

The Turn it to the Left! campaign began in 2007 and is still going strong. The message is that NIHL is 100 percent preventable and that everyone should be cognizant of how loud their music is and turn it down. NIHL is so gradual that we often don’t know it’s happening, but the effects are real.

This NIDCD campaign has been around since 1999 as a form of public education designed to teach kids between ages eight and 12 and their parents how they can protect against NIHL. The campaign is based on the Noisy Planet website, which has interactive, fun activities to teach kids about their hearing.

There are also resources for teachers, including an interactive sound ruler to give them an idea of the decibels of various common sounds in our environment and which are too loud. There are also short, entertaining videos for use in the classroom and other fun activities, as well as a screening questionnaire for kids to help teachers recognize signs of hearing loss in children, which are often confused with inattention or obstinacy.

It’s a Noisy Planet! Protect their Hearing® provides resources for the public and media that work to increase awareness of NIHL and motivate all audiences to take action to better their hearing health.

Listen to Your Buds

This campaign by ASHA, which began in 2012, is directed at the public and provides resources for parents to teach their children how to use headphones and personal music devices safely. Listen to your Buds is a play on positive peer pressure and on ear buds – the name for in-ear headphones.

According to a recent ASHA poll, nearly 85 percent of parents surveyed were concerned that their children’s hearing could be damaged by their turning up the volume too high on their personal audio devices, 75 percent thought this topic should be a public health priority, but only 50 percent had discussed with their children how to safely listen to music. Listen to Your Buds hosts concert series at various public schools and community centers that work to help kids  have a fun time while teaching them about safe listening practices. The campaign’s main tips are to keep your volume at half volume or below and to give your ears “quiet breaks.”

These campaigns are excellent resources for parents, teachers or community members who wants to teach children and teenagers about the dangers of listening to their music at a high volume.