Up to 15 percent of adults experience tinnitus (either tih-NITE-us or TIN-ih-tus is correct), which causes ringing in the ears. The sound may seem to come from inside your head, or from a distance, in one ear or both. It may be steady or pulsating, but only you can hear it.

Tinnitus sufferer Stephen Dydo, a classical composer who plays several instruments, hears a high-pitched hissing like air coming out of a leaky air hose. At its worst, the sound becomes a ringing that seems to be coming from four locations at once. Most of the time he doesn’t notice it, but when he’s focused on creating or listening to music, his tinnitus bothers him.

“It often takes the joy out of playing,” he says.

Dydo has a remedy: He stops and focuses on the sound coming from each direction separately. He often can shut off one or more of the sounds and finds that is enough relief for him to return happily to his music-making.

Many people like Dydo can tune out the distraction using habituation techniques or meditation, but tinnitus can become bothersome for about 2 percent of the population. Some people experience tinnitus occasionally, some nonstop. It can ebb and flow, and even spike.

You can hear a sample of the sounds, from “tea kettle,” “cicada,” and “static” and “screeching” here.

Scientists aren’t sure what happens in our brain that causes these phantom sounds. But we do know that the problem is often linked to hearing loss and exposure to noise. In addition, there are roughly 200 different health disorders that can produce tinnitus as a symptom. Another common trigger? Meniere’s disease, a disorder of the inner ear that causes dizziness, tinnitus and hearing loss.

About 90 percent of people with tinnitus also have hearing loss, though many people may not even realize they have both conditions. Tinnitus usually follows the pattern of your loss. If you have trouble hearing high frequencies, your tinnitus is often a high-pitched ringing or hissing. When your loss is in only one ear, you’ll usually only have tinnitus in that ear and it will go away if you get a cochlear implant in that ear. 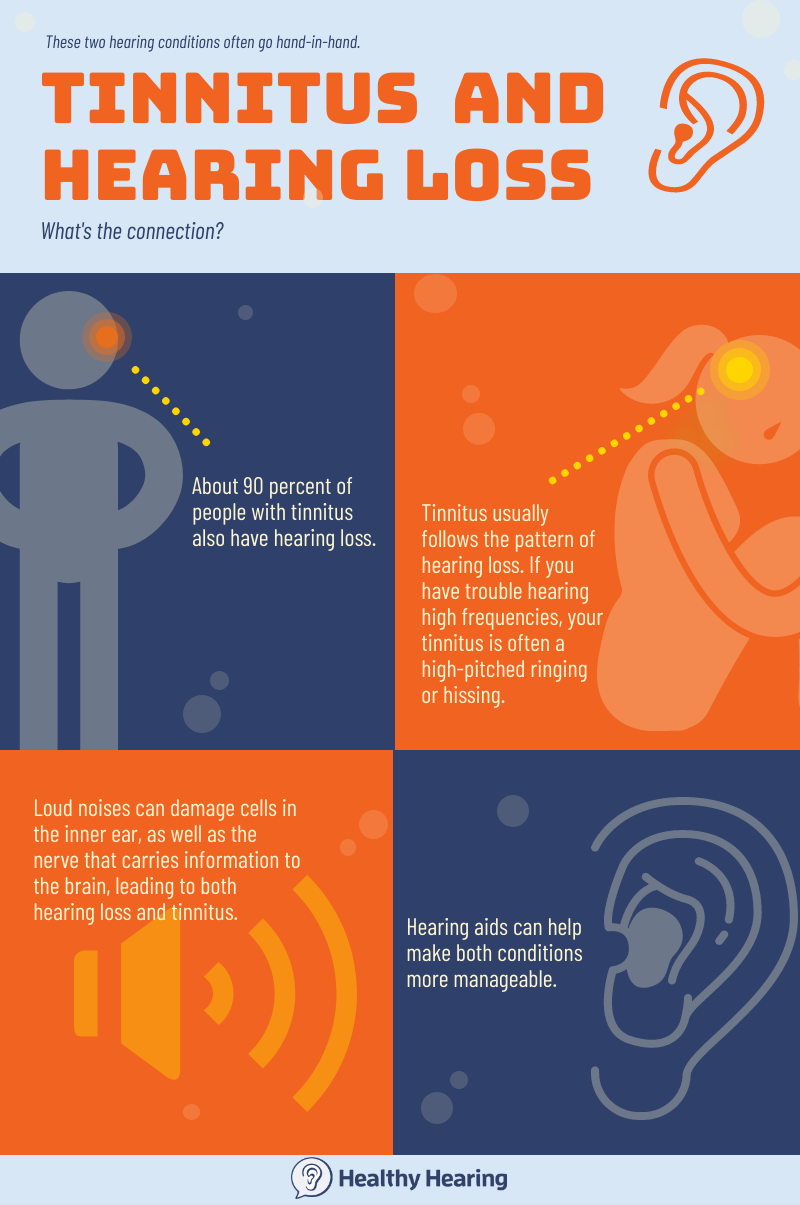 Over-compensating for loss of noise

Why would a loss of sound perception cause phantom sounds? Let’s review the pathway for sounds: A sound wave enters your ear and arrives at the middle and inner ear, the location of the cochlea, a fluid-filled area with hair cells. The hair cells turn the vibration in the fluid into electrical signals that reach the brain through your auditory nerve.

Illness, injury, noise or aging can damage the hair cells and cause hearing loss. When your brain gets less information from the cochlea, your auditory system may compensate by becoming more sensitive—the technical term is “raising the gain”—much like when you turn up the volume on a radio when the signal is low or nearly gone. This may be why some people with tinnitus, like Dydo, are especially sensitive to loud noise.

If you have tinnitus, you may also have hearing loss–even if you haven’t realized it.

Other changes may go along with that higher volume. Recent research focuses on a model of perception that involves “predictive coding.”  The idea is that we all, without conscious awareness, code certain stimuli and make predictions about whether it will happen again. Normally, the brain successfully dismisses spontaneous electrical firings in the auditory system that don’t correspond to actual sounds. According to a 2019 study, tinnitus sufferers first code the spontaneous firings as a sound, and predict that it will continue, so the mistake is repeated again and again. Expectations may also be at work in chronic pain, musical hallucinations and psychosis.

Very rarely, because of hearing loss, you may hear sounds that come from your body like your heartbeat that normally would be blocked out.

While most people with tinnitus have hearing loss, only about 30 percent of people with hearing loss experience tinnitus. What has made them vulnerable? The answer may be damage from noise.

Most of us have experienced temporary tinnitus—ringing in the ears after hearing very loud noises. One study of amateur rock musicians found temporary hearing loss and tinnitus in both ears immediately after band practice.

Loud noises can damage hair cells in the cochlea and also the nerve that carries information to the brain, known as noise-induced hearing loss.

You might link your tinnitus to age-related hearing loss, but Jos Jan Eggermont, a tinnitus expert from the University of Calgary in Alberta, Canada, disagrees. “I don’t know any tinnitus that is age-related and not noise-exposed,” he told Healthy Hearing.

Sometimes the sounds will appear after noise exposure when you’re young, go away, and return later in life as you age and a hidden vulnerability appears.

Tinnitus is more common after the age of 60 but can happen at any age. It is a common complaint among U.S. veterans returning from Iraq and Afghanistan, usually traced to a traumatic brain injury, but also possibly to battlefield and workplace noise.

Protect your hearing to prevent tinnitus

Even if you don’t have hearing loss, noise exposure can cause tinnitus, although researchers don’t know exactly how. One theory was synapse damage. (Synapses are how nerve cells communicate with each other.) In rodents, loud noises can destroy synapses between inner hair cells and auditory nerve fibers, without causing hair cell loss or permanent hearing loss. The same effect might happen in people. Other recent work suggests that noise triggers tinnitus in a different way in people without other hearing issues.

The bottom line: Noise pollution is dangerous. Wear earplugs, earmuff-style noise blockers or even a custom-fitted device if you must spend time amid loud noise. Lifestyle changes and smart choices about noise exposure can go a long way to prevent hearing loss.

If you have tinnitus, you may also have hearing loss–even if you haven’t realized it. Get your hearing checked by finding a hearing specialist or audiologist near you. Addressing your hearing loss can help ease the intensity of your tinnitus, and in some cases hearing aids also can be programmed to mask tinnitus by subtly amplifying other sounds.

More: Coping strategies when you have tinnitus and hearing loss