It’s well-known that untreated hearing loss can impact school performance. Fortunately, though, research also shows that hearing aids and other interventions (such as cochlear implants) can help minimize the impact of hearing loss.

For example, a seminal 2015 University of Iowa study showed that hearing-impaired children learn language and speech better when they use hearing aids.

“The cautionary note from our research is that any degree of hearing loss, even mild, can place children at risk. Our study shows that the risk can be minimized with early and aggressive intervention,” said Bruce Tomblin, an emeritus professor in the University of Iowa’s Department of Communication Sciences and Disorders, in a news release.

Why hearing is important to speech and language development

The ability to hear well affects more than our ability to communicate including vocabulary and sentence structure, academic achievement, social interaction and career choice.

According to the American Speech-Language-Hearing Association, there are four major ways in which hearing loss affects children:

Hearing impaired children have trouble learning abstract words like “before” and “after” and understanding words with multiple meanings. They often have trouble hearing certain sounds, such as “s”, “sh”, “f”, “t”, “k” and “ed” which affects the sentences they construct and the words they include in their vocabulary. While the gap between children with normal hearing and those with hearing loss widens as they age, children with hearing loss can catch up if they receive proper diagnosis and treatment.

When should hearing-impaired children get treatment?

That’s one of the reasons all babies in the United States are screened soon after birth. Many health issues, such as congenital heart defects and impaired hearing, often go undetected because they are not visible. Each state runs their own newborn screening program; however, the Center for Disease Control (CDC) recommends babies who are born in a hospital be screened before they leave and those which are not born in a hospital be taken to a hospital or clinic within a few days of birth. 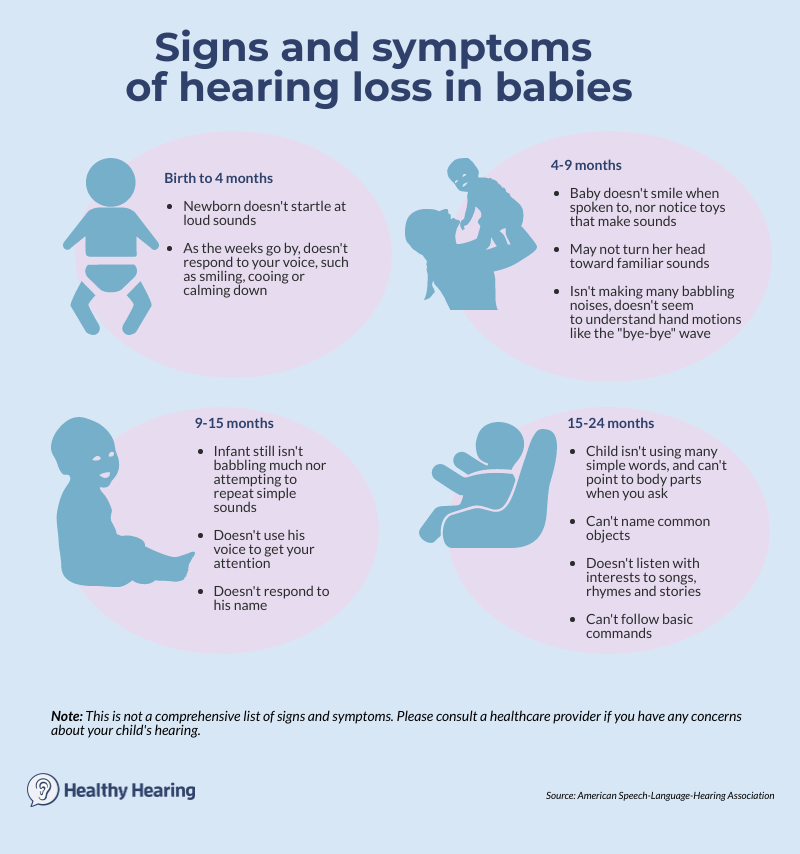 What to do if you suspect your child has hearing loss

According to the National Institute on Deafness and Other Communication Disorders (NIDCD), the first three years are a critical time for acquiring speech and language skills. This is when the brain is developing and maturing, making it a prime time for absorbing language. Experts agree infants should be exposed to an environment rich in sounds and language.

In the first three months of life, children should react to loud sounds and be calmed by a familiar voice. Infants three to six months should follow sound with their eyes, notice noisy toys, react to music and laugh, babble or make gurgling sounds. A hearing and communication checklist can be found here.

Children as young as four weeks old can be fit with hearing aids and hearing assistive technology systems.

If you notice your child does is not responding to sound, consult with your pediatrician or family physician. He may refer you to a speech-language pathologist for further examination. If your child is diagnosed with hearing loss, don’t despair.

Children as young as four weeks old can be fit with hearing aids and hearing assistive technology systems. The most common type of hearing aid for infants and young children fits behind-the-ear (BTE) because the earmold can accommodate a wide variety of hearing losses, is easy to clean and adjust, and can be detached and remade as your child grows.

Other options besides hearing aids

If your child has profound to severe hearing loss that hearing aids won’t treat, they may be a candidate for a cochlear implant, a medical device that is surgically implanted to bypass the damaged part of the cochlea and stimulate the auditory nerve. They also might be better served by a different device known as a bone-anchored hearing system.

Your ear-nose-throat physician and hearing care specialist can help you determine which treatment is best for your child’s overall hearing health.