Otosclerosis is a form of hearing loss that occurs due to abnormal bone growth in your middle ear. The presence of this bone disrupts the complex series of energy transformations that ultimately allow us to hear.

Inside the ear, sound waves are converted first to mechanical energy, then to electrical energy, explains Dr. Ana H. Kim, MD, an associate professor of otolaryngology-head and neck surgery at Columbia University Medical Center in New York. As part of that effort, three small bones within your middle ear—the malleus, incus and stapes—vibrate. For people with otosclerosis, the smallest bone in the body, the stapes, gets affixed to the surrounding structure, making it unable to move, explains Dr. Kim.

“It’s almost like a stop sign. The energy flow just stops right there,” says Dr. Kim. That is, sound enters the ear, but then the bone growth in the middle ear prevents it from making its way to the inner ear. Otosclerosis is a form of conductive hearing loss.

In some cases, people may first notice low-frequency hearing loss, meaning that low-pitched sounds are harder to hear. 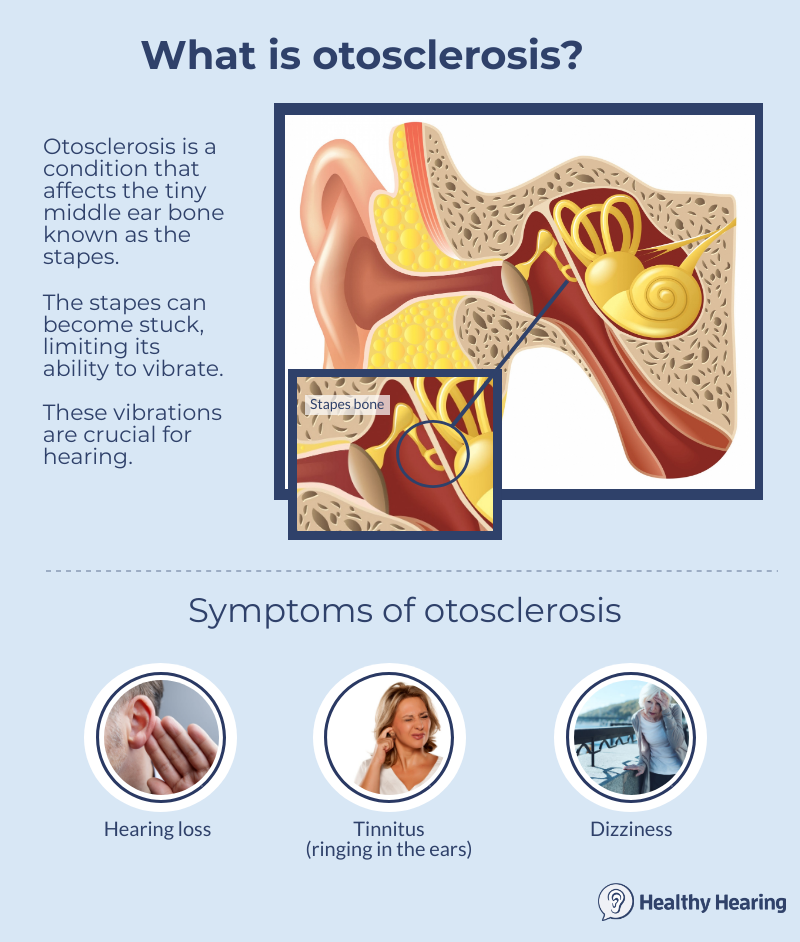 “Otosclerosis is a relatively uncommon finding among all patients with hearing loss,” says Dr. Richard Waguespack, MD, a clinical professor at the department of otolaryngology at the University of Alabama at Birmingham. More common causes of conductive hearing loss include middle ear fluid, earwax, and perforated eardrums, he says.

Still, more than 3 million people in the United States have otosclerosis, according to the National Institute on Deafness and Other Communication Disorders (NIDCD).

Often, it’s unknown why people develop the condition, says Dr. Kim. There aren’t preventable risk factors—such as exposure to loud noises or smoking—that you can eliminate to reduce your chances of getting otosclerosis, says Dr. Waguespack.

Some known risk factors of otosclerosis include:

Common symptoms of otosclerosis are gradual hearing loss as well as tinnitus (or ringing in the ears), according to Dr. Waguespack. As well, people with the condition may experience dizziness or the sensation of vertigo, notes the NIDCD.

“Diagnosis is usually straightforward,” says Dr. Waguespack. First, he says, doctors will rule out other potential causes of the symptoms. After that, the next step is an audiogram. If there are signs of conductive hearing loss during this exam, that points toward otosclerosis, says Dr. Kim. “In severe cases, you may get a CT scan as well,” says Dr. Kim.

Otosclerosis can affect one ear—or both, says Dr. Waguespack. When you have it in both ears, it’s referred to as bilateral otosclerosis.

No medications are available to treat otosclerosis, per the NIDCD. If you are diagnosed, the treatment strategy may depend somewhat on the severity of your hearing loss.

Doctors sometimes recommend a wait-and-see approach, without any intervention. Observation is a good approach when the hearing loss is mild, and you can hear well enough for everyday life, says Dr. Waguespack.

Another alternative is using hearing aids to improve your ability to hear. “For some people, the level of hearing loss is to a degree where a hearing aid is fine,” says Dr. Kim. Getting hearing aids will treat the primary symptom—hearing loss—but does not treat the underlying condition of otosclerosis, per the NLM.

Finally, surgery is a treatment option. Your doctor may recommend a stapedectomy. During this surgery, “we remove the non-moving stapes bone and replace it with a prosthesis made out of titanium,” explains Dr. Kim.

Stapedectomy is performed under either general or local anesthesia, and typically takes around 90 minutes. Often, you can return home the same day, although some hospitals and clinics may recommend an overnight stay.

The majority of the time, this surgery is successful at restoring hearing, she says. There are, however, rare cases where complications can ensure, leading to profound hearing loss or other side effects. If you have bilateral otosclerosis, typically you’ll have the surgery in your worse ear first, allowing it to heal before having surgery in the other ear, says Dr. Waguespack.

Keep in mind that “choosing to try a hearing aid does not generally preclude having surgery at a later date,” says Dr. Waguespack, meaning you may want to try hearing aids first, and later opt to have surgery.

Getting help for otosclerosis

As with nearly all health conditions, ignoring the situation is rarely the best strategy. “Otosclerosis will still progress if you don’t treat it,” notes Dr. Kim.

If you have symptoms—hearing loss, dizziness, tinnitus—the best approach is to get diagnosed. Then, if you are diagnosed with otosclerosis, talk to your doctor about your next steps, and what makes sense for you given your level of hearing loss.

“There are so many treatment options available, you shouldn’t just not do anything,” says Dr. Kim.