For most of her adult life, Alice*, a psychologist in New York, has struggled to hear, especially in noisy places. Yet when she’s sought out professional help, she passes her hearing test with flying colors.

Alice, who now avoids crowded restaurants and parties, most likely has what’s known as “hidden hearing loss”—a brain problem hearing tests aren’t designed to catch. For this reason, it’s not a well-understood condition.

What is hidden hearing loss?

“Hidden” hearing loss is defined as hearing loss that’s not detectable on standard hearing tests, which zero in on problems within the ear.

No one is sure how many people have hidden hearing gloss. But in a study of more than 100,000 patient records from a 16-year period, about 10 percent of patients who visited the audiology clinic at Massachusetts Eye and Ear had a normal audiogram, like Alice, despite their complaints. 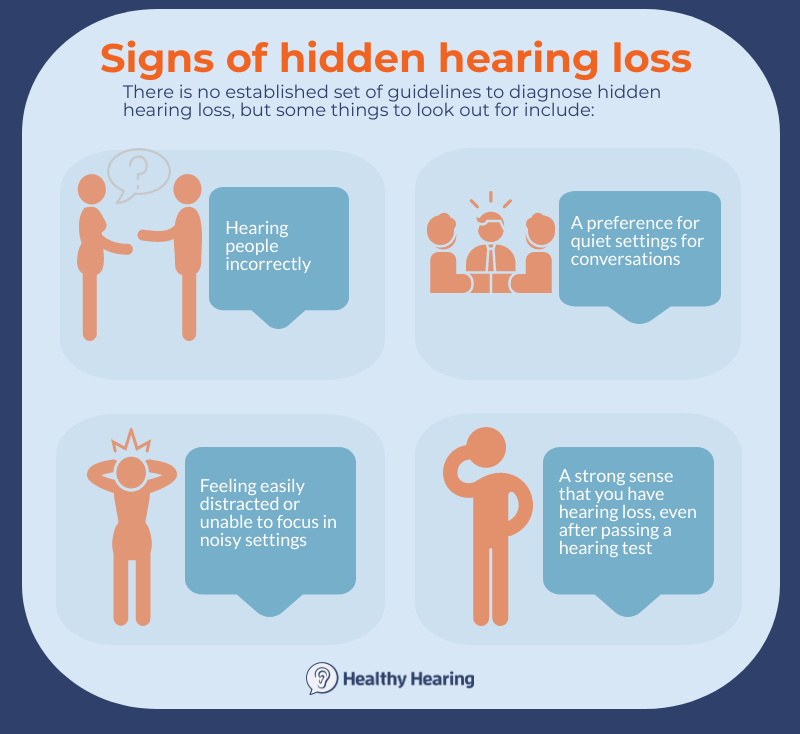 There is no established set of guidelines to diagnose hidden hearing loss, but some things to look out for include:

What’s happening in the brain?

When we hear, movement in the cilia, or hair cells, in the inner ear send signals to the auditory nerve, also known as the vestibulocochlear nerve, or the eighth cranial nerve. These signals must cross over synapses, which are the vital junctions between nerve cells.

Ordinary hearing loss arises from damage to the hair cells or the nerve. Hidden hearing loss often arises because of loss of synapses in between. The signal arrives incomplete, therefore missing information we need to interpret words. Medically this is sometimes referred to as “cochlear synaptopathy.”

Audiologists have described patients like Alice for years. In 2009, a watershed study in mice documented that loud noises could specifically destroy synapses. In the study, mice were forced to endure a 100-decibel noise—about the same level as using a lawnmower—for two hours. Later the team discovered that although the mice’s hair cells had survived, half of their synapses were gone.

Humans with lost synapses may still hear the beep in a hearing test even at a low volume that stumps someone with cell or nerve damage.

Noise pollution and aging combine to aggravate the problem. “Most researchers feel that long exposures to even low-level noise may cause hidden hearing loss and most agree that the aging auditory system reveals this problem. We lose some synapses as we age,” said Dr. Catherine Palmer, Director of Audiology and Hearing Aids at the University of Pittsburgh Medical Center.

Another possible cause, reported in 2017, could be problems with the cells that make myelin, a substance that insulates the neuronal axons (brain cells) in the ear.  Autoimmune disorders like Guillain-Barré syndrome—linked to food poisoning, the flu, hepatitis, and the Zika virus—attack myelin.

Note that hidden hearing loss can be mistaken for attention deficit hyperactivity disorder (ADHD), which happened to Alice after she took a hearing test. It’s also not the same as “central auditory processing disorder,” which is often diagnosed in children and arises at a different level of the brain.

The team at Massachusetts Eye and Ear has developed two tests to catch hidden hearing loss. The first measures electrical signals from the surface of the ear canal to capture how well they encode subtle and rapid fluctuations in sound waves. For the second test, participants wear glasses that measure changes in the diameter of their pupils while listening to speech in noise. Our pupils reflect how much effort it takes to understand during a task.

When the team tried out the tests on 23 volunteers with clinically normal hearing, their ability to follow a conversation with babbling in the background varied widely. The two tests together predicted which people would have difficulty.

What it’s like to live with hidden hearing loss

Alice’s story is emblematic. She recalls one time when she stood in a cluster of three in a room of 15 people, a reunion of her college classmates. “I was right next to them and I couldn’t hear one word,” she said.

“I eventually asked one [of them] to go into a room with just a few people, and we were sitting but I had to move my chair closer and lean forward,” Alice explained. “I said, ‘I’m sorry if I seem like I’m sitting in your lap.’”

She’s dealt with the problem for years. When she was in her 20s she saw an audiologist who told her that her hearing was normal, but suggested that she might have an “attention problem.”

Yet she can hear a whisper in a quiet place; she only has trouble understanding what audiologists call “speech in noise,” conversation in groups or noisy places. As background noise in restaurants became steadily louder, Alice looked for quiet restaurants. Large parties “lost their appeal,” she said. She became a therapist.

“It’s a wonderful profession because it’s just me and another person and if I can’t hear them, I say What?”

She had her second audiogram a year ago, decades after the first. Again, her hearing was normal and the audiologist explained her difficulties as an “auditory processing problem.” Alice took her audiogram to a Costco hearing aid department, but was told that because her hearing was in the normal range, the store wouldn’t sell her an aid.

There is no direct treatment, although research is underway to find medications that would prompt neurons to grow new synapses. In cases where there’s at least slight or mild hearing loss, people will benefit from state-of-the art hearing aids that have “speech in noise” settings. These use directional microphones to pick up the signal in front of you and reduce sound behind you or on your sides. You can also place a microphone near the signal you need to hear, and wear a Bluetooth receiver or hearing aid in your ear.

Look for a hearing care provider who is knowledgeable about hidden hearing loss. They’ll be able to help you decide whether any of the available assistive listening devices can help you, like a personal FM system or a mobile app that can caption live conversation. Be sure to take advantage of ADA-required assistive listening devices in theaters, places of worship, airports and other public spaces.

At home and in your social life, you’ll find it easier to be in quieter places. Eat earlier in the evening when restaurants are quiet, choose restaurants with carpeting and without bars, or sit in a booth. Arrive at lectures earlier so you can sit near the front. At gatherings, don’t be shy about creating smaller groups and learning in–even if you feel like you’re sitting in someone’s lap.

Lastly, try not to deny the problem and withdraw. Be aware of how it affects your mental state. Like any kind of hearing loss, hidden hearing loss “can have an effect on your psyche, creating avoidant behavior and social anxiety,” Alice noted. “You might not even know it.”

*To protect Alice’s privacy, we have used a different name.